When most of us think about keeping our  teeth and gums healthy,  what usually comes to mind is … brushing and flossing.   This is what we’ve heard all of our lives: “Brush twice a day to keep the sugar bugs away”, “Only floss the ones you want to keep”.  These sayings are true but there is another  major component to our dental health: the foods (and beverages) we consume.

Did you know that prior to the mid-1800s tooth decay was primarily a disease of wealthy Westerners?  What happened in the mid-1800s?  Due to improved farming methods and improved transportation, sugar became cheap!  Ancient people ate mainly lean animal proteins, vegtables, beans, roots, occaisional fruits (in season) and grains. They obviously had certain health issues (trauma, infection, infant mortality) but in some ways ate a much healthier diet.  Weston Price was a famous dentist who spent thirty years traveling to isolated parts of the world in the early 1900s. He found that tooth decay and crowded teeth were very rare in pre-agrarian societies. As soon as these societies switched to a Western-type diet, they developed the same health and dental problems as Westerners. These health issues include obesity, high blood pressure, Type II diabetes, certain forms of cancer and… rampant tooth decay. In fact, In the 1700s the average American ate less than 2 pounds of sugar per year. Today the average sugar consumption is over  100 pounds per person per year! 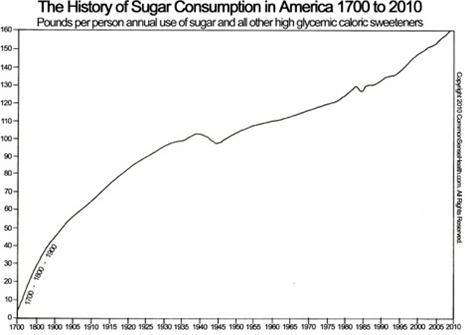 So, if we want to avoid these ill-effects we need to eat less sugar and fewer simple carbohydrates. But this is easier to say than to do! There is sugar (or sugar’s close cousin – high fructose corn syrup) in most processed foods. In a 20 ounce soda (a “medium” size at most fast food restaurants) there are over 17 packets of sugar! Being aware of the issue is the first step. Try drinking coffee with a teaspoon of cinnamon instead of sugar. Drink water flavored with a lemon slice instead of soda, sports drinks or fruit juice. Also, try eating a more “primitive” diet: lean proteins, beans, vegetables. Especially good are the cruciferous vegetables: broccoli, cabbage, kale, cauliflower, bok choy, etc. Also, include “fermented” foods in your diet: sauerkraut, plain yogurt, kimchee. These aid in digestion and have cancer-fighting properties.

Here is a dish I like to make a big batch of and then eat it for either breakfast, lunch, or dinner:

Sauté the garlic and  onion in the olive oil until soft. Add pepper and add beans (drain first). Slice the chicken into small pieces and add to the mixture. Simmer on low for 15-20 minutes. If you want you can eat with a tortilla and salsa. I like adding some lettuce, sauerkraut and plain yogurt for a zippy, tangy salad!